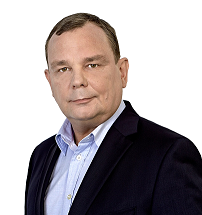 In January 2016, a newly-composed Council of JSC „Baltiс International Bank”started its operation. The three-member Council comprises Valeri Belokon and Vlada Belokon, the both re-elected for a further term of office, and the newly-elected Andris Ozolins.

Council member A.Ozolins emphasises: as a niche player that employs a professional and motivated team, Baltic International Bank has vast potential for developing wealth-management services geared towards affluent families. Furthermore, Bank’s senior management has a profound understanding of the challenges facing the financial sector and the ability to see and use opportunities stemming from the new situation. I’m delighted to share my experience and to actively co-operate in devising Bank’s strategy whose implementation will bolster a sustainable development and stable profit growth in the long term.”

Andris Ozolins is a high-calibre expert on the banking industry. His multiple-year experience in the banking sector both in Latvia and abroad will enable BIB to enhance its corporate governance in accordance with best practice standards.

The newly-composed Council was elected on 27 November 2015 by the extraordinary general meeting of the shareholders. The members of the Council will each serve a 5-year term starting from 4 January 2016.

Andris Ozolins does not own voting shares of JSC Baltic International Bank.