Album „Terra Mariana. 1186–1888″ Sponsored by the Chairperson of the Council of Baltic International Bank

On Sunday, April 27, the presentation of a facsimile copy of the unique album „Terra Mariana. 1186–1888″ (with commentaries) was held in the new premises of the National Library of Latvia. The album was sponsored by Valeri Belokon, the Chairperson of the Council of Baltic International Bank and patron of the arts. 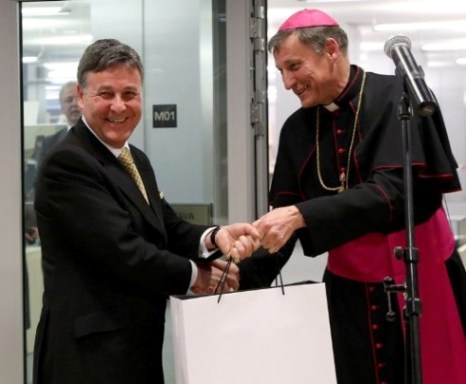 The album „Terra Mariana. 1186–1888″ tells us about the spread of Christianity in Latvia and Estonia, the lands once known as Livonia. Terra Mariana (Land of Mary) was the official name for Medieval Livonia. One original copy of the album was printed in 1888 in Riga and thereafter presented to Pope Leo XIII by polish landlords who resided in the Baltic States; the original is preserved by the Vatican Apostolic Library. In the Baltic States, there are no equal-value analogues of the album in terms of concept, content and design. The content is enormously impressive: the album has 70 parchment pages and contains a wealth of visual and textual material about Livonian castles, castle ruins, churches, the coats of arms used by ancient families of noble descent, seals, historical personalities, and impressions of ancient silver and gold coins. 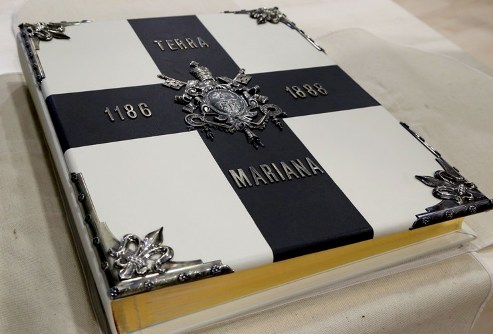 During the event, the first editions of the facsimile copies of the album „Terra Mariana. 1186–1888” (with commentaries) were gifted to the major contributors, including the patron of arts Valeri Belokon. The Director of the National Library of Latvia Andris Vilks specifically expressed his gratitude to V. Belokon who had sponsored the publication of the album in the crisis-hit country. At that time, the funding could not be received from the government or church budget.

The presentation of the album „Terra Mariana. 1186–1888″ (with commentaries) was held as part of the event „At the crossroads of Latvia’s identity”. The event was arranged to celebrate the canonisation (elevating to sainthood) of two distinguished Popes – John XXIII and John Paul II.  The event „At the crossroads of Latvia’s identity” was organised by the National Library of Latvia, the Ministry of Culture, the Ministry of Foreign Affairs of the Republic of Latvia and the Roman Catholic Church of Latvia and was sponsored by Baltic International Bank.