Heraldry was invented in medieval times. As hereditary symbols and marks of identification, coats of arms were used in Western Europe and Latvia and date back to the 12th century. Heraldic traditions and the practice of using coats of arms evolved over the centuries. A coat of arms is traditionally unique to an individual family.

Family heraldry is comparatively much less developed in Latvia. In 2005, the Parliament (Saeima) of the Republic of Latvia passed the Coats of Arms Act (Ģerboņu likums). Under the Act, the heraldry authority approves the coats of arms of natural persons in the same manner as that of municipal bodies. Since then, interest towards creating family coats of arms has grown substantially.

Valeri Belokon, who is the dedicated patron of literature and a shareholder and the Chairperson of the Supervisory Board of Baltic International Bank, has come up with the idea of publishing this unique book.  Valeri Belokon registered his family coat of arms in 2011. 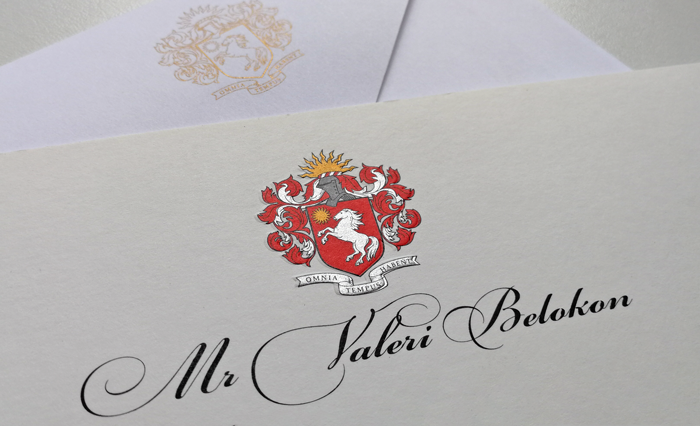 At all times, Latvia could boast of strong people and strong families known for their ability to foresee the future, to be well beyond their time, and to see new opportunities both during periods of Latvia’s prosperity and while witnessing the most complex and whimsical zigzags of the country’s history. I am confident that the families capable of looking through time and of passing down to the next generations their identity, family values and love for their country and its people form the basis of every free and independent nation. The publication of this book will be the perfect gift for Latvia on the eve of the next century!
Valeri Belokon

„The public interest in genealogy continues to grow. On the threshold of the centennial of Latvia’s statehood, more and more people are showing an ever-growing and keener interest in genealogy, family history, their roots and symbols. The creation of the family coat of arms is indicative of the willingness to trace your ancestry, learn more about your family roots and strengthen intergenerational bonds.  The process of creating the family coat is quite interesting as it proves conducive to honouring and guarding your family as the greatest treasure, helps reinforce kinship ties across generations, and fosters the continuance of your family into the future,” the Minister for Culture Dace Melbārde emphasises.

According to the project, the book “Coats of Arms in Modern Latvia” will be divided into two parts. The introductory section of the first part “Family Coats of Arms” will give the readers an insight and view into the history of family coats of arms used in Latvia from ancient times to the present day. This introduction will be written by the art historian Imants Lancmanis. The central section will include heraldic descriptions of the family coats of arms approved by the State Heraldry Commission (Valsts heraldikas komisija) of the Republic of Latvia. For the first time, the heraldic description will be translated into English by Dr.Hist. Armands Vijups. This part of the book will show heraldic colours used on coats of arms. There are colours and symbols that have traditional meaning in heraldry. This part of the book will also include a glossary of heraldic terms. Coats of arms and their accessories are described in a concise jargon called blazon. This technical description of a coat of arms is the standard that must be adhered to no matter what artistic interpretations may be made in a particular depiction of the arms.

The introductory section of the second part “Family and Coat of Arms” will include the text, as written by Dr. Phil. Daina Teters, about the value of coats of arms as objects of semiotic study (semiotics is the study of signs and symbols). The central section will capture photo portraits of the owners of family coats of arms, their stories about how and why they decided to create their coats of arms, and their narrations about their family.

The book “Coats of Arms in Modern Latvia” is scheduled to be published by the end of 2019. To make the book available to the general public, it book will be donated to the libraries across Latvia and abroad. In addition, the book will be sold in bookstores, albeit in limited quantities.