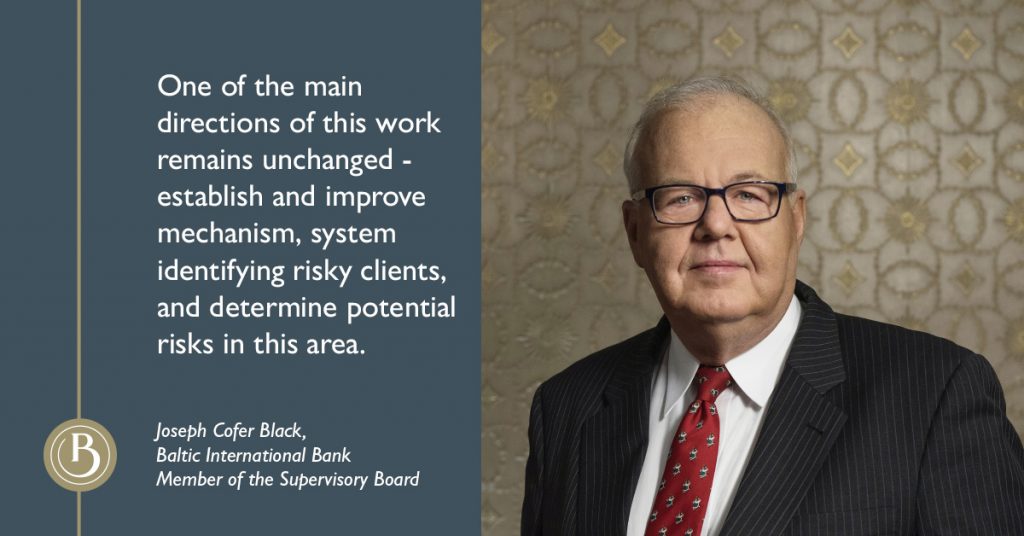 What is the global situation with the dirty money in the world – is it improving or getting worse?

Honestly, this question is almost like a question about religion – is its impact increasing or decreasing?

Speaking on the macro level, I can surely say that during the recent period the flow of “dirty money” has always existed in the world.

By the recent period, do you mean beginning from the September 11, 2001? Or is it when everyone started to pay attention to that?

I would say earlier. At least looking from the US perspective, the story about the “dirty money” starts with the war against drugs. Disregarding the huge resources devoted to combat this phenomenon, very rarely were these activities able to significantly impact or change the “street price” of drugs. And if the price does not change – then there isn’t real consistent success in the fight against drugs. Yes, they shot Pablo Escobar and caught El Chapo, took down some of the drug cartels but others formed all too quickly to take their place. What to do next? In these circumstances, the law enforcement authorities came up with the strategy of “follow the money”. Logistics and putting the generated profit back into the financial system are the weak links of the drug distribution system. If we can’t win in the logistics area, then finances remain. I remember that during those times, in 1980s and 1990s when I was going to South America and visiting a port or beach, motor boats with powerful engines worth more than a million USD stood side by side just like cigarette packages on the shelf– dozens. They either belonged to the drug dealers or were taken from the drug dealers – and their task was to transport drugs. If your business can write off losing vehicles worth more than million USD as the cost of doing business – then your business is inherently highly profitable. These were the circumstances when the strategy changed – instead of trying solely find and disrupt the logistical side, try to follow the money and compromise the heads of the drug cartels.

As you mentioned the September 11 attacks, they occurred when I was the Director of the Counterterrorism Center in CIA. In the beginning, we were not that successful with the concept of “following the money”, concerned that it might take away already limited resources in other areas. The second limitation was related to the fact that unlike the drugs target, terrorism does not require a lot of money. It was not expensive to organise the September 11 terror act, maybe a few hundred thousand USD.

It is pocket money compared to the amount of funds involved in drug trafficking. It is difficult to trace a small amount of money. Still, gradually the intelligence organisations started to do just that in cooperation with international partners. I have to say that results were better than expected; still it is very difficult to disrupt financing of terrorist units. Best results are obtained when we monitor the financial system and search for anomalies therein but, of course, we also have to deal with political limitations.

Speaking about limitation of “dirty money” and policy...I would dare to say that there is a feeling in the Latvian financial circles that the report of the US Financial Crimes Enforcement Network (FINCEN) about the ABLV Bank and the following actions were too harsh, unjustifiably emphasizing Latvia. Meaning that money-laundering problems exist also in other countries and Latvia already since 2016 started reinforcement and control of the anti-money laundering requirements.

I have been to few countries where Americans are not considered part of their issues. And my Latvian friends think just like you. But what would you have us to do?  There are so many crucial questions/problems and we have to deal with them and the tyranny of time no matter how noble the intentions. But dissatisfaction by one partner with the other in a relationship may well be expressed in a clear and obvious manner.

Let’s be honest – this is my 14th time in Latvia already, I really like Latvia and its citizens.  But before I made a decision whether to come and work here, I did a little research. Reputation of Latvia on the internet was not especially good and happily, incompatible with reality.

However, during the last decade we have witnessed multiple violations of the anti-money laundering regulations.

It is not fair to blame Americans that they are protecting their interests and deciding to send a clear message, in the situation when other methods have already been tried before. Only those who do not know the background of the relationship can do that.

I have heard all the following - “this bank was made a victim”, “it is not true”, “this is false news” and even - “Russian special services stand behind that”.

Nonsense! “Money laundering on the “systemic” level, as was reported in the FINCEN report – is a checkmate game. A charge not made lightly.

Systemic is a serious term.

Systemic – it means that an integrated system has been created at an organisational level, performing money-laundering activities regularly and repeatedly. And as a cherry on top - “money laundering on behalf of North Korea” cannot be ignored. Find me another country on the world map with whom US has relations that are more difficult and where money-laundering activities on its behalf could infuriate Americans more.

What do you expect the US would do in this situation? And how long can Latvian banks participate in the money laundering activities for the financial system state reputation not to suffer?  In this case, you can call US action tough love; it is based on good intentions and genuine desire to help the system that is struggling on its own.

As the Head of the FCMC Pēters Putniņš have stated publicly – in the case of North Korea, money laundering the means were coming from some European banks, passed through Latvia and returned to other European banks. Why the role of Latvia was emphasized? Why there isn’t similar FINCEN reports about other European banks?

I am not in the situation to comment on statements by Mr. P. Putniņš.

And there were reports about other banks as well that might not have attracted so much attention.

Still, I stand by my words.

The US administration has neither time, nor energy to deal with made-up things. Reading the FINCEN report in its entirety, it is clear that the US was highly motivated to send a clear message. And believe me – these reports were not compiled by a random official pointing his finger at a map and haphazardly choosing a country to target. Compilation of these reports includes combined work by many institutions and the results reflect a coordinated view.

Majority of the money flowing through the Latvian banking system come from the CIS countries, first, from Russia. In considering the difficult relations between the Western world and Russia, why would we worry that money is flowing out of the Russian economy, taking away resources for investments, and being spent in Western countries, buying mansions on the Mediterranean coast, insanely expensive yachts and English soccer clubs?

Here I agree with you – maybe we should not worry. Although the relations with Russia have become more complicated, still the majority of Americans like Russians – the way they perceive themselves has many similarities with the way we Americans perceive ourselves.

We could ask why Russia had to adopt such quarrelsome and aggressive attitude regarding international issues and why Vladimir Putin has to publicly demonstrate short films about aiming of nuclear weapons on the targets in US.

When Russians are buying mansions in Italy, I am more amused than worried.

You want yachts – be my guest.

Real estate in New York – wonderful. What concerns me is that the source of this money may originate from the diversion of state funds and fraudulent privatization.

If you look what people are included in the US sanction lists – then the depressing majority are people who became rich using methods considered illegal in US.

Some say that US is hindering the development of Russia.  Russia these days can be its own worst enemy.

But democratic and stable Russia full of satisfied and content people is in the interests of US. And it would be much better to invest the money spent on mansions and yachts in Russian infrastructure, social services and education.

Do you have many colleagues who with the previous work experience in intelligence services, combatting the financing of terrorism and money laundering, and diplomatic services start working in the banking system of the Baltic’s?

It is a good question as work in the financial system has many similarities to intelligence and diplomatic services.

Many principles are the same – know what you are dealing with, protect your own people and our friends, invest in the future, effectively use the limited resources to reach your goal. In fact combatting of money laundering is my main task as the Member of the Supervisory Board here in Baltic International Bank.

One of the main directions of this work remains unchanged - establish and improve mechanism, system identifying risky clients, and determine potential risks in this area. Nevertheless, answering to your question – no, I don’t see the inflow of American specialists. I see more representatives of some other European countries.