On Saturday, 18 May 2013 Baltic International Bank organised one of the events of its 20th anniversary – a meeting of journalists with Prof. Ian Goldin -  Professor at the University of Oxford and the Director of the Oxford Research School, also known as the Oxford Martin School, advisor for the World Economic Forum in Davos, former Vice President of the World Bank, EBRD economist, advisor to President Nelson Mandela and the author of numerous books and publications, in order to enable a discussion regarding the trends of development in the global economy and the changes in global economic policy, giving rise to state budget deficits and expenditure cuts, social problems and the stratification of society. 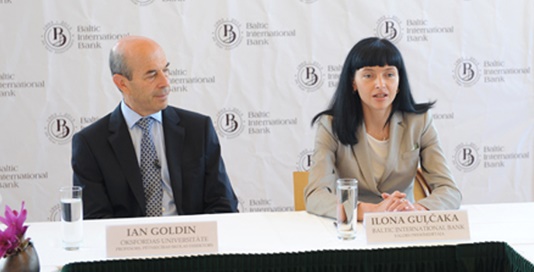 “We are now standing at the crossroads – the coming 20 or 30 years could become the best in history, but they may well also turn out to be difficult and economically dangerous. Being a small country, Latvia is vulnerable and sensitive to risks, but at the same time, it stands in a good position to utilise the opportunities offered by the world. We have already been forced into changes, probably, the most rapid ones the world has ever experienced,” says Professor at the University of Oxford Ian Goldin during his visit to Latvia.

“The world is now experiencing the steepest economic growth in history. The development is determined by two key driving forces; namely, globalisation and hyper-integration. There are more people than ever before, they are much closer to each other than ever before in history; the number of illiterate people has been reduced on a global scale, poverty has diminished, life-spans are growing and health care is improving.  We can be grateful that we live in a time of democracy and mobility. Ideas are created in the heads of educated and intelligent people; they are developed through cooperation, and therefore I think that over subsequent years we will experience the unprecedented development of innovations and growth of productivity. Nevertheless, there are two sides to every coin, and such close links between countries also means that impacts on different systems are felt across the entire world. If something happens in one country, the rest soon feel its impact as well. The financial crisis was a striking example of this and the question is, what is in store for us next,” says Professor Goldin.

Private capital movement is one of the things facilitated by the development of technologies, open borders and mobility, influenced by the investment policies and tax systems of countries. The Chairperson of the Board of Baltic International Bank Ilona Gulchak says: “For the last 100 years the world has gone through more than 20 crises, but this one in particular makes us think about a change of values; we see the political changes, the shift of influence from the West to the East, the growing social inequality, the changes in the social expenditure of countries. The wealthy people in the world attract huge attention and unfortunately, are often perceived as the cause of problems, and not the solution. However, it should be emphasised that the owners of large capitals have a large responsibility towards  society, as investment decisions adopted by them leave an impact; not only on the small circle of persons involved, but also on society as a whole. These decisions can develop countries and economies, and provide for places of employment”.

Economists emphasise – one of the largest problems to be solved over the period of the next decade is the increasing inequality both between countries and at a national level. It is observed everywhere – in Europe, in the USA, China and Brazil. Mrs Gulchak reveals: “There are more than 10 million millionaires in the world at the moment and, according to forecasts, their number over subsequent years, for example in Russia, will increase by 50%; it will double in the USA, and in China it will even grow three times over. Currently half of the entire global wealth is already controlled by 2% of people. This brings the question of how to concurrently ensure the principles of market economy and democracy to the forefront – how to form tax policy, including for rich people, to provoke their interest in investing into the economy, instead of hiding assets in offshore accounts or refusing citizenship. In the USA for example, 1.5 million persons refused state citizenship for tax purposes”.

“We are in favour of the implementation of responsible policy in the country, orientated toward the development of the economy; of a balanced tax policy in respect to all social groups and of an assessment of investments from the point of view of efficiency. Tax policy promotes investment and it is essential for countries to realise this and facilitate the interest of the capital holder to invest in its own country. This is perfectly evidenced in Latvia’s example – since the amendments to the Immigration Law in 2010 more than four thousand people have received residence permits; the scope of their investments has reached 318 million lats, which has been invested in real estate, subordinated capital of the commercial banks of Latvia, as well as the capital of companies. Not only investors from Europe and the CIS countries, but also investors from China have expressed their interest in Latvia,” says Mrs Gulchak.

Global growth over the next five years will be dictated by the developing countries. According to Professor Ian Goldin, it is expected that India will experience 6% growth, China – roughly 8%, Brazil – 4%, Africa – almost 5% and these are the highest indices in history. Up to now no country in Europe or North America has ever achieved such long-term development indices.  However, the speed of development in Europe and the USA will be quite slow within the next few years – up to 1% in Europe and up to 2% in the USA.