“The conflict between the United States and China is a step in the opposite direction of globalisation which for many years has been the driving force of the global economy,” Konstantins Goluzins, head of the Asset Management Department of Baltic International Bank said to daily newspaper Diena. 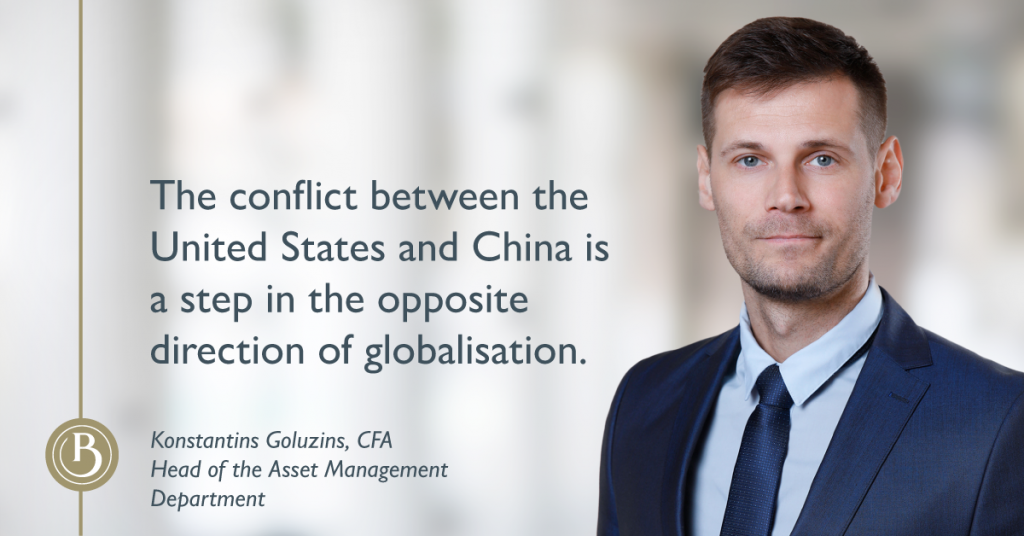 The rhetoric about the introduction or possible introduction of various trade restrictions in the future, combined with the already beginning slowdown in the global economic growth, also contributed to the reduction in industrially significant commodity prices on global commodity exchanges.

The price of industrial metals, such as copper and aluminium, fell by more than 5% and 8% respectively in the last three months after its peak at the end of March.

Investor sales didn’t leave out oil. The escalation of tensions in the Persian Gulf region is driving up prices for this hydrocarbon resource, while recent price trends have been negative.

Namely, since the last local peak of prices at the end of April, the price of black gold has fallen by almost 16%. Although tensions in the Strait of Hormuz, connecting the Persian Gulf and the Gulf of Oman, have reached unprecedented levels, oil prices are now closer to the lows of the last month than to the highs which at the same time may mean that stockbrokers hope that the conflict will not escalate, and that economic background is not conducive to higher prices. The overall decline in commodity prices is a signal of falling inflation which may be favourable for consumers in the short term; but if this process drags on, it indicates problems in the global economy and, possibly, signals a new economic crisis.

Konstantins Goluzins, investment portfolio manager at Baltic International Bank, draws attention to the recent difficult economic relations between the United States and China in the context of changes in commodity prices. “The price of raw materials in open markets depends on supply and demand. Taxes on one of the raw materials are transferred to the consumer which increases the final price of goods and thereby reduces the ability and willingness of consumers to buy the finished product which, in turn, leads to an overall decrease in demand,” K. Goluzins explains.

He adds that with the exchange of new tariffs and public threats between the United States and China, prices fell not only for the raw materials that are under the threat of taxation in one of the countries, but for everything else. According to the expert, the conflict between the United States and China is a step away from globalisation which for many years has been the driving force of the world economy. “By imposing taxes and limiting trade, the economies of both countries will lose thus leading to a decrease in GDP growth rates.”

Given the importance of these two countries in the global economy, the growth rate of the global economy will also decline. Due to that, prices for many products have fallen, since in the near future growth in demand for them is not expected.Konstantins Goluzins

Speaking of what is happening on commodity exchanges, Mr. Goluzins says that prices for most goods have fallen, and he believes that they are likely to continue to fall.

At the same time, according to the expert, the opposite happens with the price of gold which is considered an asset buying which may help avoid the risks of a crisis. It is expected that the price of this asset will rise, K. Goluzins says.

Should gold be bought?

Replying to the question about possible price changes, Mr. Goluzins said that in the near future prices for such goods as oil, copper and aluminium will not increase because the rate of cooling of the global economy is obvious. “Of course, there is always shock when the pace of supply or extraction of raw materials can drop dramatically affecting the price of raw materials. In the near future, the price of gold will rise rather than fall as many still use it as a reliable asset to avoid financial market volatility,” an expert at Baltic International Bank says.