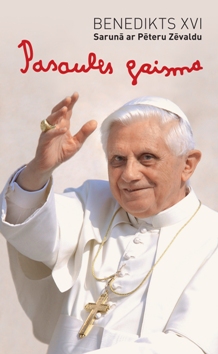 Baltic International Bank financially supports the release of the Latvian-language edition of German journalist Peter Seewald’s book-length interview with Pope Benedict XVI, the head of the Roman Catholic Church. The new book titled Light of the World: The Pope, The Church and the Signs Of The Times. A Conversation With Peter Seewald has gained huge popularity worldwide.

According to His Excellency Metropolitan Archbishop of the Roman Catholic Archdiocese of Riga Zbignev Stankevich (Zbigņevs Stankevičs), business people would have done a great service to the whole community by supporting the release of such books, thus enabling Latvian-language readers to get familiarised with the evaluation of worldviews and tendencies that dominate modern society. Valeri Belokon, the Chairpeson of the Council of Baltic International Bank, has supported the idea of translating and releasing the book. Valeri Belokon believes that the time has come for society to re-evaluate the system of values and ethical principles that most directly affect the development of the entire society.

The Chairperson of the Bank’s Board Ilona Gulchak emphasises that the publication of Latvian-translated book Light of the World on the eve of The Holy Day for the Assumption of the Blessed Virgin Mary celebrated at the Aglona Basilica (the most important Roman Catholic shrine in Latvia) proves highly emblematic since it induces the readers to cognize themselves and comprehend the true values that really matter to their fellow humans. Benedict XVI has handwritten Latvian-language title Pasaules gaisma (Light of the World). This bears witness to the Pope’s heartfelt desire to engage with Latvia’s general public which, like many people worldwide, faces a lot of moral, ethical and worldview issues. The book is addressed to a wide circle of readers. The readers, who consider themselves religious, secular or doubting, will begin pondering about what they really know about Pope Benedict XVI, the Catholic Church and its future", Ilona Gulchak says.

„It is the first-time personal interview that the Pope gives in this form in Vatican history. Apparently, there is a serious reason behind it. Benedict XVI’s predecessor John Paul II was unable to find an interview time and wrote answers to written questions posed to him by an Italian journalist Vittorio Messorist, who wrote Crossing the Threshold of Hope. The book became a best seller throughout the world and aroused enormous interest also among non-Christians. Pope Benedict XVI has taken into account John Paul II’s experience and --being convinced that the world currently faces a make-or-break moment-- wishes to use all possible ways to call on the people to affect intra-societal processes," the Archbishop Zbignev Stankevich explains the uniqueness of the book.

„This excellent book focuses on fundamental issues relating to our existence in the contemporary world. This particular book gives direct answers to a lot of questions, including purely personal things, the Catholic Church-related themes, and public, political and economic processes in the world. The book is not silent about  contradictory, polemic and unpleasant things,” says Alberts Sarkanis, the book’s copy editor, former Latvian Ambassador to the Holy See.

The book has already been published in German, Polish, Italian, and English. In August, the Latvian-language edition will be available in bookstores and Catholic communities. It was co-published by publishing houses Vox Ecclesiae and Pētergailis. The book sale proceeds will be channelled towards educational projects to be undertaken by the Roman Catholic Church in Latvia.

The book’s author Peter Seewald (1954) is the former Editor-In-Chief of the German secular magazines ‘Der Spiegel’ and ‘Stern’ and newspaper ‘Süddeutsche Zeitung’. Currently he continues as an independent journalist and lives in Munich, Bavaria. He is the author of many books.