"Green" and "profit" are compatible

In the interview with Latvijas Avīze, Viktors Bolbats, chairman of the Management Board of Baltic International Bank, shares his views on green bonds and changes in business thinking on environmental issues. 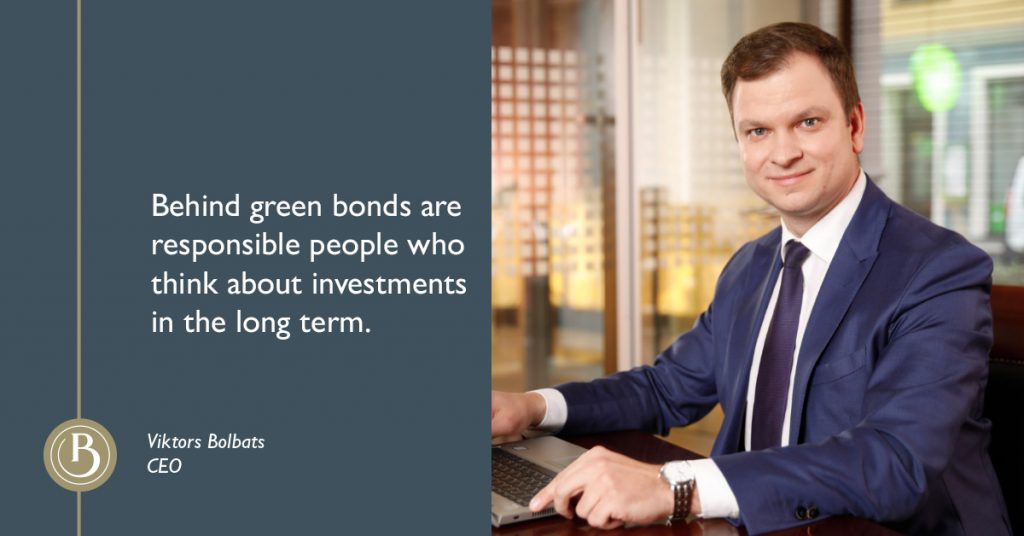 Willow tree budding in February and autumn days in July make investors think about transforming the economy in line with climate change. The example of the Scandinavian countries shows that green bond issue can also become a permanent agenda item. In Latvia, the first few steps have been taken in this area, and the path to follow has been marked.

Of course, Latvia, like any other country or region, is significantly behind the level of green thinking in the Scandinavian financial world. To the north of us, the public demand for green investments and solutions for green investments is much higher than in other developed countries. The basis for obtaining the so-called green loans in Scandinavia, which is proud of its rich forests and rivers, is the availability of green bonds.

We included the green component in the Bank's strategy at the end of 2016; the concept is called ESG (environmental, social and governance) and implies caring for the environment, social responsibility and following the principles of good governance. This is one of the commonly accepted ESG principles actively discussed this year by the ECB and the European Banking Authority, and I think that the emergence of this concept at the regulatory level is just a matter of time.Viktors Bolbats

The debut of green bonds took place in 2010 in Norway and was implemented by Nordic Investment Bank in conjunction with one of the Norwegian state banks – KBN Kommunalkredit. A green bond means borrowing money in the financial market, i.e. bonds are issued and such securities are bought by investors thereby lending money to the issuer – a fund, a bank, a company. Of course, such bond is declared green from the very beginning – there are specific rating agency indicators that reflect the presence of the green factor. A company issuing a green bond in its prospectus announces to the market that it will use borrowed funds for environmentally and socially friendly projects. An example of such a company in Latvia is the green bonds issued by Latvenergo and Altum.

“At the same time, it should be noted that in Scandinavia historically, especially in Sweden, there are a very large number of industries that are financed by banks and provide a large number of jobs, but are not environmentally friendly, for instance, the extraction and processing of minerals and fossil fuels,” Viktors Bolbats, Chairman of the Management Board of Baltic International Bank, comments and adds: “I would not say that this is the main factor. Green bonds are undoubtedly a vector in the financial market, and the Scandinavians were among the first to plot it”.

First in Central and Eastern Europe

Speaking about us, it is necessary to take into account how young the Latvian economy and the Latvian financial market are. The NASDAQ Riga exchange parameters, i.e. the volume, size and number of issuers, are not comparable with the level of development of the respective institutions, for instance, in Scandinavia. These are incomparable things – the Scandinavians have gone a long way of development, their financial market is more developed, bank bonds are common for them, they have Nordic Investment Bank which is an international bank.

Baltic International Bank has obtained a license to organise the issuance of bonds – we can provide companies with raising capital in the form of bonds. The fact that the bank can organise such an instrument for customers is called a mandate. Thus, the company gives the bank a mandate to attract financing. We already have some mandates given by the companies that are developing in an environmentally friendly manner. Green finance has long been not marketing, but an expression of civic responsibility.

Turning to investor psychology, I will give a slightly rough example. If a company that does not pay taxes wants to borrow, the investor will think: “At some point, such a client may not pay its debt.” The same thing here – when it comes to green bonds, there are responsible people behind them who not only think about financial indicators, but also how much this investment will be needed by people in another 20 years.

Article in the newspaper Latvijas Avīze, ""Green" and "profit" are compatible” (LV)