Baltic International Bank has closed the first half of this year with a profit of 274 thousand euro. In Q2 2020, the Bank continued to be active, strengthening its position as a local capital bank, improving its operational performance and resuming lending. 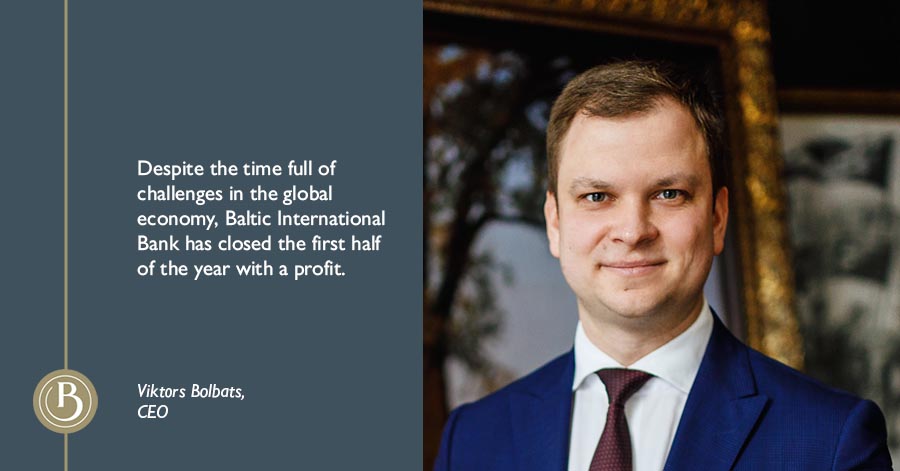 Viktors Bolbats, Chairman of the Management Board of the Bank, points out: “I am pleased that, despite the time full of challenges in the global economy, Baltic International Bank has closed the first half of the year with a profit. It is important that in Q2 we achieved the goal set for the Bank at the beginning of the year, and that is to resume lending. In the first half of the year, we approved loans totalling 5 million euro, and we see that lending to small and medium-sized enterprises, which is in the focus of Baltic International Bank, is significant for stabilising the national economy as a whole. The capacity of local capital banks allows them to understand the needs of domestic entrepreneurs and respond quickly, providing the necessary business support mechanisms for domestic entrepreneurs.”

In the reporting period, the Bank strengthened its capital adequacy ratio, which reached 17.37%, and also maintained a high liquidity coverage ratio at 145%.

The Bank closed the first half of 2020 with the following financial results (data on the Group is given in brackets):

The Bank maintains a well-diversified structure of liquid assets represented by bonds (14%), claims on credit institutions (6%), claims on the Bank of Latvia (77%) and cash (3%). The liquidity coverage ratio (LCR) was 145%. The net stable funding ratio (NSFR), characterising the availability of a stable funding profile in relation to the composition of assets and off-balance sheet activities, reached 160%.

In the reporting period, for the second consecutive year, the Bank was awarded the highest scoring category – Platinum Category – on the annual Sustainability Index, confirming the compliance of the company’s activities with the principles of sustainability. The Platinum Category is awarded to companies that have fully integrated corporate governance into their operations and in which responsible persons have been appointed at both the managerial and executive levels. “It is an honour to become a winner in the Platinum Category for the second time, and simultaneously it is a confirmation that the concept of sustainability in the Bank’s operations is not merely a short-term phenomenon, but also a carefully thought-out and implemented strategy in accordance with the principles of ESG. Environmental sustainability, good governance and social issues are the issues that we have worked on persistently for a long time, transforming Baltic International Bank into a modern investment bank and introducing ESG principles at all levels of activity,” says Viktors Bolbats, Chairman of the Management Board the Bank.

This year again, the Bank traditionally supported the ceremony of presenting the Annual Latvian Literary Award (LALIGABA) in the first half of the year and also continued work within the project Bibliotēka (Library) aimed at promoting reading. In the first half of the year, the Bank also carried on with the reconstruction of the Kalēju Quarter, renovating the complex of buildings between Kalēju and Vecpilsētas Streets.

The financial report of Baltic International Bank for the 1st half-year is available here.