We spoke with Bank’s Member of the Supervisory Board Hans Friedrich von Ploetz on universal good governance principles, different worldviews and ability to have confidence and trust. 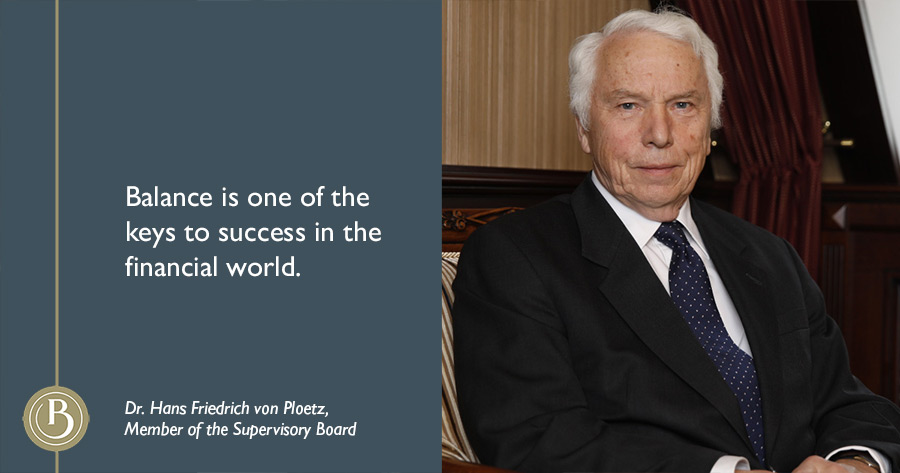 What should be the good corporate governance principles in the modern company, what should we base them on?

In the beginning I would like to remark that there are several universal principles operating in the good governance area and at the same time good governance is also a universal problem, global challenge. On one hand, we have these governance principles initiated by entrepreneurs and countries, on the other hand – there is a part of entrepreneurs who does not enjoy this approach and are “professionals” in bypassing these agreements. This duality can be vividly perceived, for example, in cyber world. On one side a great progress has been achieved but unfortunately there are illegal dealings of separate private entities and also groups of people who are trying to become rich on the expense of others. Using the fact that cyber world is not regulated and governed. So a critical question arises – how we are able to control the corporate governance, making it a universal virtue for everyone.

Why it is so difficult to implement these principles?

One example of good corporate governance. In one large European bank Manager responsible for the anti-money laundering policy was invited to the Board meeting to report on her activities. First they asked this employee about her relationships with the banking business management people. “Business people hate me,” she replied. It allowed to conclude that work is going smoothly and bank management can feel safe, – she is doing whatever she possibly can to truly implement good governance principles. Of course, a significant question arises: What is the right balance between the strict application of the regulatory framework and allowing adequate space for business – exactly this balance is one of the keys to success in the financial world.

Still disregarding all efforts in implementing these principles, we regularly hear about some new scandal in the banking area.

In this part of the world we know as the European Monetary Union, we have reached a great progress in adopting single currency and establishing monitoring of the system. Good corporate governance is self-evident standard here. But it does not mean that all is achieved. Loud exposures in various countries of Europe, also Scandinavia, we are used to perceive as a leader in good governance and reputation area, indicate that governance of companies requires constant upgrades and supervision. The same relates to Latvia, its financial system. Nothing extraordinary or unforeseen is happening here. You encounter the same challenges as everyone else and one of them is to preserve this energy constantly – implement and monitor good governance, restrict money laundering activities in the financial system, combat terrorism financing etc.

Why people are so different in perceiving and interpreting concept of honest and dishonest business?

I will provide an indirect answer to this question. Three professors of the financial sector – from France, United Kingdom and Germany – recently published a joint work, book “The Euro and the Battle of Idea” discussing why it is often so hard for Europeans to find agreement on important issues of financial regulations[1]. Is it because basic national interests collide? These three professors met in the Stanford University where they had a teaching job. Their discussion revealed that in most cases it was not national interests that were the problem but different traditions to get things done.  On the occasion of the launch of this very interesting book in the French Embassy in Berlin the German Minister of Finances Wolfgang Schäuble of that time added a very relevant observation: In centralized France there is a natural tendency to turn to the President in cases of big crisis; in Germany, being traditionally a federal state, the first question always is: what does the law or international agreements say? By definition: a federal state without rules would end in chaos! This is the key reason why Germans expect its European partners to be as strict in respecting common rules. Trying to explain such behavior by sinister national interests totally misses the point.  There was no objection to this argument from the three professors.

One of the widely discussed issues related to corporate governance and reputation are confidence and trust level of people into companies. Does the trust still matter?

Business is based on trust and it flourishes in the environment full of trust and confidence. It is one of the main provisions for things to happen. I worked in very different regions as a Diplomat and I have to say that trust and confidence are very different for various people. For example. Last year when visiting Iran a taxi driver asked me to explain the reasons for German economic success. I tried to give him three important reasons which he seemed to like quite a lot. Firstly our understanding of rule of law implies that everybody is under the law, every citizen but also the government. Secondly, we believe that religion is a private matter of each citizen, religion should be separate from the state. And thirdly, experience has taught us that individuals are more successful in running businesses than governments. Free and fair competition is an absolute must; it is in danger when generally the state is in charge. These three fundamental principles are clearly understood both in Germany and Latvia and elsewhere in the EU. What sometimes differs is their practical implementation. Our citizens and our business people can rely on the rule of law, and on our courts of law, at the highest level in the European Court of Law in Luxembourg. It is a very important both for business, state administration and every person individually.

So different worldview can become one of the problems in introducing of common principles of governance?

Yes, when I was posted in Russia we discussed such issues quite regularly. One experience may be of interest: At the end of an interview with my favorite Russian radio station, Eho Moskvi, my interview partner and I had a drink with Alexei Venediktov, the director of the company. Suddenly, my interviewer remembered he had to go to school to pick up his kid. Half joking, at the door he turned around and said “Deutschland, Deutschland über alles!”[2] obviously thinking this was the German national anthem. I asked him to stay for a moment for me to give him its first words: “Einigkeit und Recht und Freiheit für das deutsche Vaterland![3]” You know, his face become read and tears filled his eyes, and he said to me: “I would like for the anthem of my country to begin with these words!” A very emotional moment that stays in my memory.  What is it that countries strive for?  This is why, in the European Union and by the way also in NATO, we always highlight that we are communities of values.

What about understanding and adopting of good governance practice in Latvia?

Latvia is a comparatively new player in the global financial market and generally it is succeeding. We are aware that much has been achieved to improve the financial sector thanks to the efforts of the national financial regulator. However the efforts to implement good and sustainable governance principles never ends, there will always be market players who are “innovative” and unfair. This may require stricter regulations or a different balance between regulatory and business development. It seems to me that currently Latvia is on the right track.