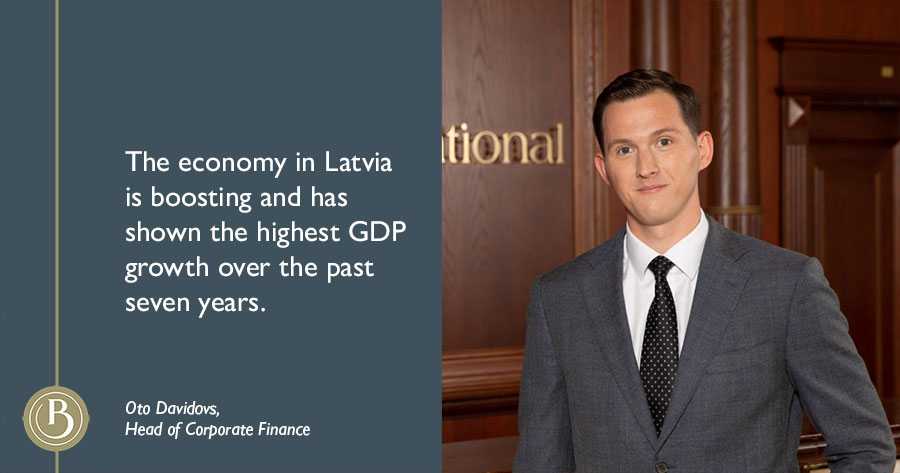 Latvian economy growth rate has been gradually increasing over the past seven years and as of 2011 outstrips the average economic growth rate in the European Union (EU), reaching its peak of 4.8% on y-o-y basis in 2018, the rate that is more than twice as big as that of the EU (2.0%). For the years to come the economic growth of Latvia, as predicted by the European Commission, is expected to slow down.

Last year the most significant contribution to the flourishing economic environment in Latvia were the rapid growth of the construction sector and promising volumes of investments from the EU (Ministry of Finance). Booming construction services sector has also caused unemployment decrease.

Inflation dropped to 2.6%, mainly because of the tamed growth in food prices. Notwithstanding, inflation is expected to rise moderately in 2019 up to 2.9% and dip again in 2020 to 2.5%. At the same time, wages are expected to keep stable (Bank of Latvia).

As for the future outlook, the economic growth in Latvia, as predicted by the European Commission, is expected to slow down in the upcoming years. The forecasted trend of GDP growth rate for 2019 is 3.1% while the respective figure for 2020 is lower at 2.6 % level. The main drivers are the weakening external demand and deteriorating activity in the financial and transportation services sectors.

Growth in emerging and developing European countries in 2019 is foreseen to deteriorate more than previously anticipated. The main causes are stagnating global trade growth and considerable uncertainty regarding trade policies formed by executed, declared and threatened trade measures. Henceforth, the Latvian economic environment could be less favourable than currently projected (European Economic Forecast).

GDP growth was driven by continuing expansion in service sectors, the chief among which are the construction sector (22% increment in output), augmented information and communication services (13% increase in production), and transportation sector (5% increase in output that was due to the grown passenger turnover) (Central Statistical Bureau of Latvia). During the last three years construction sector has attained high development rates: prompt and significant reduction in the shadow economy and a substantial increase in turnover. Moreover, the development of the real-estate market created the most towering growth figure in the past five years. The foremost driver for the development of the sector was the implementation of the European Union structural fund projects (Ministry of Economics).

The most widely imported products were mechanisms and mechanical appliances (11.7% of total import); electrical appliances and electrical equipment (10.2%); and mineral products (9.5%). The largest importers were Lithuania, Germany, and Poland (Central Statistical Bureau of Latvia).

Investment grew more rapidly in goods manufacturing sectors than in service sectors. An immense contribution was the increase in investment in construction and real estate operations. Growth in demand, as well as a positive sentiment of entrepreneurs, can contribute to the increasing investments. What is more, availability of EU structural funds further reinforces the positive outlook for investments.

Due to continuing slumps in nonresident servicing in the banking sector, the financial and insurance sectors' growth dropped by 7.3% in 2018. Nevertheless, this decline is considered to be better than expected at the beginning of the year in the wake of the quandaries at ABLV bank and the decline in the financial sector that was 17% drop in 2017 (Ministry of Finance, Central Statistical Bureau of Latvia).

Since 2018, the minimum liquidity requirements for credit institutions across the EU are harmonized, with a minimum Liquidity coverage ratio (LCR) requirement set at 100%. [1] Starting this year, EU countries no longer have the option to impose independent, nation-specific minimum liquidity requirements that would apply to the entire credit institution sector as a whole. In 2018, the weighted average LCR for 14 Latvian banks amounted to 252%, which is twice as much as the minimum requirement. Capital ratio of 14 Latvian banks decreased by 1% in comparison to the previous year’s figure reaching the value of  21% in 2018 (still meeting the minimum legislative requirement of 8%) (Finance Latvia Association). Notwithstanding the first tier capital (CET1) grew by 79 basis points, representing the value of 19.79% (Bank of Latvia Data).

The economy in Latvia is boosting and has shown the highest GDP growth over the past seven years (4.8% in 2018). Despite forecasts, for the upcoming years, the vital highlight should be put on the financial sector that has been struggling yet overcomes difficulties and moderately recovers concurrently maintaining the capital and liquidity requirements.