Co-sponsored by Baltic International Bank, an open event Commercialization Reactor Performance Day was held in Riga on 7 October. The ongoing business workshop offered attendees the opportunity to hear stories of success attained through participation in Commercialization Reactor, meet founders of start-ups, learn more about projects being developed and take part in discussions with investors.

„Having embarked on transforming itself into a strongly-performing regional financial hub, Latvia should not only focus on inbound foreign investments but develop different investor venues and business incubators in the country,” emphasizes the Chairperson of the Bank’s Board Ilona Gulchak. „Commercialization Reactor is a technology commercialization platform tailor-made for encouraging high-tech start-ups. Over the past five years, 30 new enterprises have been established and raised in total more than EUR 3 million in pre-seed and seed capital, thus providing a significant boost to economic growth.”

The new start-ups, which were fuelled by Commercialization Reactor and attended the Performance Day event, presented their unique technologies that have no analogues in the world. The inventions include a unique magnetron sputtering technique; revolutionary solution for enhancing the quality of diary products produced by the diary industry, unique devices used to detect potential cracks in structures before they get worse; next-generation technology for multilayer coating of implants; online video sensor for analysing ice and snow mass in ski resorts; and others. 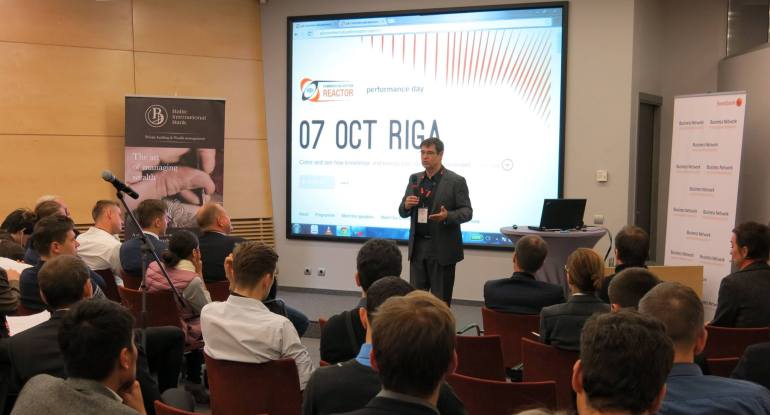 The founder and head of Commercialization Reactor Nikolay Adamovich emphasized: „There is a certain category of people who prefer to create something new, immense and interesting. Just they are true entrepreneurs, regardless of whether they run their own business or not. The most iconic entrepreneur of the last century was Thomas Edison while in modern times. A legendary Steve Jobs, Elon Musk, and many others should be mentioned among modern-time entrepreneurs. For an entrepreneur, the main thing is to see the opportunity and take advantage of it. There are plenty of such people in Latvia, and Commercialization Reactor is geared just towards them.”

Commercialization Reactor was founded in 2009 in Riga with the aim of launching start-ups based on scientific and technological achievements. Among the enterprises born through the efforts of Commercialization Reactor are Naco Technologies, Pogritech, Conelum, Eventech, Evoled, Mahydy, Advanced Vector Analytics, Nanooptometrics, Koatum and others.