British Entrepreneurs Display Much Interest in Business Opportunities in Latvia

British businesspeople are truly interested in business opportunities in Latvia, and they very much welcome our country’s experience in overcoming its economic and financial crisis.  At the same time, however, it is important at the government level to ensure the stability of Latvia’s economic development – something that is one of the most essential factors in attracting investments.

These were some of the key ideas expressed on October 17 at a business forum organised in London by the Latvian Embassy in the UK and the Latvian Investment and Development Agency, “Safely Navigating in the Rough Waters of the European Economy.”  Many businesspeople gathered for the event, which was opened by Latvian Foreign Minister Edgars Rinkēvičs.  They learned about Latvia’s economic development trends, as well as about the investment environment which exists in the country.  The forum was organised in partnership with the Baltic International Bank and the City of London Corporation. 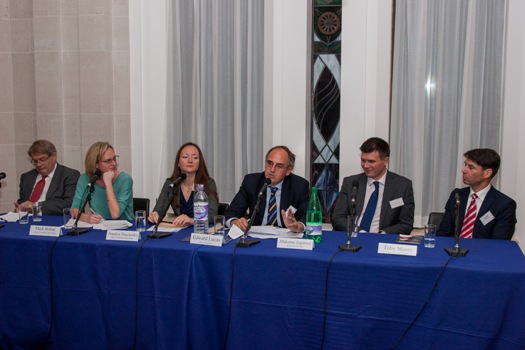 During the first part of the forum, speakers provided a deeper look at Latvia’s economic and political processes, confirming the country’s rapid economic growth in the wake of the crisis and also creating belief in the positive developmental direction in which our country is heading.  During the second part of the event, speakers described Latvia’s financial and investment environment, and they also shared their own business success stories.

The Latvian ambassador to the UK, Eduards Stiprais, said after the forum that “it is important for Latvia’s ongoing growth to ensure that the government preserves its course in terms of the country’s development whilst, at the same time, continuing on with the conservative economic policies that have been put in place, because stability is one of the most essential factors in attracting investments.”  The ambassador added that investors very much want to know and forecast what will happen in the specific business environment in 5 to 10 years’ time.  “We have earned the trust of British investors, and now it is essential to preserve it,” said Mr Stiprais.

Investors with years of business experience in our country told forum participants about advantages which are open to entrepreneurs in Latvia, also speaking to shortcomings which must be taken into account when planning a business.  Speakers pointed to Latvia’s advantageous geographic placement in terms of neighbouring Russia and nearby Germany and Scandinavia.  They spoke about good air traffic links, a higher level of education (including Russian and English language skills), etc.

“It is nice that experts at the forum said that Latvia has all of the necessary prerequisites for further growth and competitiveness – effectiveness, flexibility, stability and geographic proximity,” says the Deputy Chairperson of the Board of Baltic International Bank, Natalya Tkachenko.  She noted that members of the audience posed in-depth and specific questions during and after the panel discussions and other sessions of the forum, as well as in direct interpersonal communications during the process, adding that this showed that British businesspeople are not just informed about Latvia, but also truly interested in the development of business operations in Latvia.

The editor of The Economist, Edward Lucas, told the forum that Latvia’s competitiveness is based on several unique factors, including low costs which are one-third or even more lower than is the case in other countries – this depending on the relevant sector of business operations.  Lucas said that over the past 20 years, Latvia, which was once a country with a distinctly negative image, has changed in the positive direction – something, he added, which has a favourable effect on attracting investors.

The head of the British office for the Latvian Investment and Development Agency, Guntis Rubīns, said that “a few years ago, investors who were thinking about investments in Eastern Europe did not think about Latvia in the sense of business opportunities – they were familiar with Poland and the Czech Republic, but not with Latvia.  Now, however, the situation is changing.”

Business forums and conferences have been organised at various levels in London for several years now, and each of them represents an additional contribution toward further relationships between Latvian and British businesspeople.  Organisers of this forum said that they are satisfied with its results, adding that there should be other events in future to bring together a targeted and interested audience, international and knowledgeable experts, as well as representatives of Latvia’s government and the country’s business circles.

Along with Ambassador Stiprais, Ms Tkachenko, and Mr Lucas, speakers at the forum included the director of international relations and communications for the Bank of Latvia, Juris Kravalis, a representative of the City of London Corporation, Mark Boleat, the director of the Accenture Latvia IT company, Maksims Jegorovs, the senior partner in Latvia of the Imprimatur Capital Fund Management risk capital fund, Toby Moore, and the editor of the fDI Magazine of The Financial Times, Courtney Fingar.