Baltic International Bank became a financial partner of the Forbes Club meeting which was held on 30 October in Kyiv. Members of the Forbes Club assembled to meet the consultant of the Christie's Auction House Valentine Skurlov and the jeweller Diana Sharonova in order to discuss the subject of investments in the art of jewellery.

The historian of jewellery, and expert of the Russian section of Christie's Valentine Skurlov, shared the rules of collecting and stories about the House of Faberge with guests of the Forbes Club, and gave practical advice on working with a collection of jewellery to determine its investment value and stimulate its growth.

During the event guests of the club could have a visual presentation about an item from the private collection of the unique works of art owned by Baltic International Bank. The bank presented a replica of the “Renaissance of the 21st Century” cup to the participants, made at the order of the bank by the famous Latvian jeweller Oleg Auzer. The sterling silver cup became a valuable contribution to the development of Latvian art and the implementation of the idea of the bank’s shareholder Valeri Belokon about the origination of a unique collection of masterpieces, able to occupy a special place in cultural heritage.

The keynote speaker of this meeting of the club is a full companion of the Order of Carl Faberge, expert in jewellery Valentine Skurlov, who has been pursuing jewellery and antiques for 35 years. In the USSR he headed the Department of Demand and Advertising of the General Directorate of the Jewellery Industry, in the mid-1980s he started studying the heritage of Carl Faberge. Now he is a consultant at Christie`s and an expert for the Ministry of Culture of Russia. Another speaker is the jeweller Diana Sharonova, graduate of one of the most prestigious educational establishments in the field of fashion – London’s Central Saint Martin’s College of Art and Design, a representative of the family dynasty of jewellers – the Sharonovs. At various times the jewellery made by the Sharonovs has been awarded to Mikhail Gorbachev, Boris Yeltsin, Vladimir Putin, the Federal Chancellor of Germany Angela Merkel and leaders of European countries. Their products were often used as diplomatic gifts to recognised men of art, as well as a number of city mayors of different countries. Diana Sharonova is the winner of numerous prestigious competitions, including the modern medallic art competition of the British Museum. Her works were exhibited at museums in London, Paris, Turin and Moscow.

The Forbes Club is a series of meetings of businessmen and top managers with scientists, economists, writers, politicians, public figures and other opinion shapers in Ukraine and beyond its borders. Starting from the end of 2011, among the honorary guest speakers of the Club have been Peter Aven, Mikhail Fridman, Oleg Tinkov, Alexander Rodnyansky, Sergey Belousov, Leonid Boguslavsky, Kakha Bendukidze, Sergey Guriev and others. 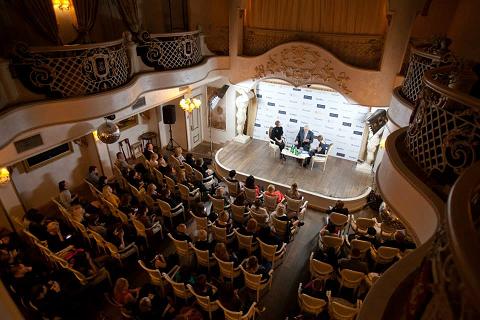 Baltic International Bank was the club’s partner for the first time. “The Forbes Club is an excellent platform for communicating with interesting and influential people, who have achieved a lot and who wish to and can exchange opinions and influence on certain processes not only in Ukraine but also beyond. The subjects of discussion and the invited speakers always rouse keen interest among the participants, as a result contributing to the appearance of incredible ideas, some of which are subsequently implemented in economic, cultural and social projects. We are glad to become partners of this club of Forbes magazine – one of the most influential and authoritative business publications on the market in Ukraine, and the subject of collecting works of art and cultural heritage will always remain exceedingly interesting and topical for the bank having such clients and family traditions as ours”, noted the Director of East European Markets Development Yevgeniya Litovchenko.