Joseph Cofer Black, the council member at Baltic International Bank, in interview to internet portal DELFI says - "I arrived here, and I really expected to see something else. I expected something gray, dark and depressed. But you could actually rival Vienna." 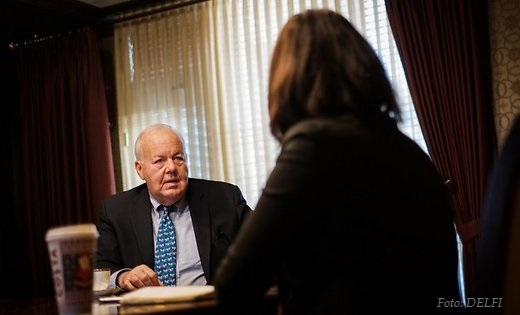 "Cofer Black, the new council member
at Baltic International Bank (BIB) is no ordinary banker – the highlights of
his career are in intelligence in Africa and the war on terror in Afghanistan.
Just recently he was cited as a candidate for Director of the Central Intelligence
Agency (CIA) under the new Trump administration. However, the former head of
the CIA’s Counterterrorism Centre says that combating terrorism has a lot in
common with the banking sector."

"Portal “Delfi” met with Mr.Black a month after he had become a council member
at BIB, when he was in Riga for the third council meeting. He describes himself
as “retired from civil service”. The company, which he represented after
leaving the CIA and later also the US government – “Blackbird Technologies” –
was sold to defense industry giant “Raytheon”. Having deliberated his next
step, Black became a board member at “Northwest Biotherapeutics”, a biotech
company. He explains that he was approached by cooperation partners of BIB in
the US. “I’m all ears when it comes to countries that I’ve never been to,”
Black reveals why he was attracted to the opportunity to work in
Latvia."

"I arrived here, and I really expected to see
something else. I expected something gray, dark and depressed. But you could
actually rival Vienna. I was especially surprised how amazingly nice the people
are. I always look at how polite waiters and salespeople are. If I tell them
that I’m an American and they’re still nice to me, then that’s really
something,” he jokes. But he was even more surprised by the language skills of
the locals, which had even fooled the former intelligence specialist into
taking some Rigans for Americans. He describes the management of BIB as highly
principled, decent people trying to work under difficult conditions, therefore
the job offer had seemed alluring."
Read the full interview