The premiere of the film „I WILL NOT DIE” was held on 27 February at K SUNS movie theatre. Dedicated to Ilmars Blumbergs, the film was initiated by a patron of arts Valeri Belokon and sponsored by Baltic International Bank. 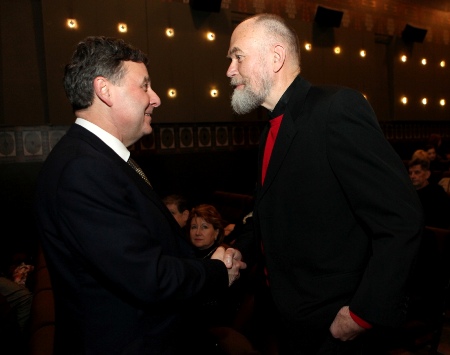 During the premiere-specific event, the producer Anita Vanaga emphasised that „the film is a very meaningful continuation and completion of the project following the book and exhibition titled „Ilmars Blumbergs. I WILL NOT DIE”. The film is the artist’s look-alike since Ilmars Blumbergs is not only a good narrator but also visually attractive and vivacious interpreter of his own artworks.”


To highlight Blumberg’s importance in the Latvian art, Latvia’s Minister for Culture Dace Melbarde cited a quote from Napoleon Bonaparte „ A Picture is worth a thousand words”. „Thanks a lot to the makers of the film for giving everyone an opportunity to familiarise themselves with the art mogul Ilmars Blumbergs, his artworks, and his way of thinking.  Words of appreciation are also appropriate to Valeri Belokon for his wonderful example of arts patronage and initiative due to which a DVD-format film will be made available to all art schools in Latvia. To understand the art, you need to learn the artist’s language”, said Dace Melbarde. 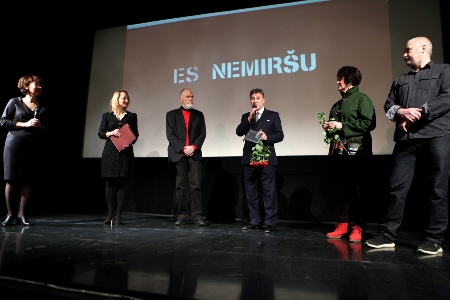 „The works created by master Blumbergs are not perceived as art only. The great works remind us about the life which stretches beyond the limits of measurable time. It is impossible therefore to say that the idea to make the film is the brainchild of a single person because everyone who immerses himself in Blumberg’s art wishes to immortalize it. We’re happy to be side by side with the Grandmaster throughout his artistic advancement”, said the Chairperson of Baltic International Bank Valeri Belokon shortly before the presentation of the film to the audience.

„Thanks you for coming!” said Ilmars Blumbergs very laconically.

The film „I Will Not Die” made by Janis Redlikh and Maya Smildzina (the both are film directors) tells us about Ilmars Blumbergs. It also tells us about the author and the principle of the creation. The film focuses on Blumberg’s stream of consciousness where the times, real-life events and different layers of culture are interacting. He delivers his monologue during his solo exhibition held at the Arsenal Exhibition Hall (the Latvian National Museum of Art) in 2013. The exhibition featured the cycles such as „Visu laiku snieg” (It’s snowing all the time), „Nepabeigts darbs” (Uncompleted work), „Tas pats” (The same), „Kalpošana” (Service), and others. 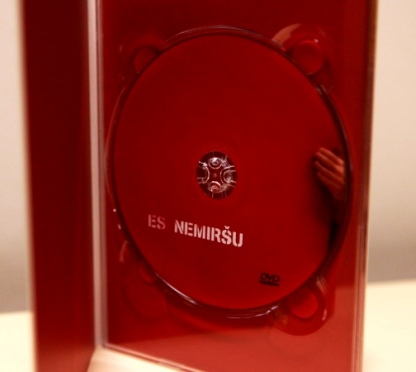 „Everything is speaking to you. The form brings together the most unimaginable places. As if snowflakes are melting on the surface of a bright yellow object-glass. This is one of the greatest games where no bluff is even expected. The Human Being and the God. The Life and the Death. The Man and the Woman. And you yourself standing vis-à-vis”, says Ilmars Blumbergs in the film.

„In the shamanic teaching of the Mexican Indians, the revision of all life events is of great importance. When death comes, it picks out the revision as the victim -- this human phantom with life-experience and emotions while the shaman transforms into an immortal spirit. At his solo exhibition, Ilmars Blumbergs also revisits the life events. Therefore, the title „I WILL NOT DIE” has not been chosen accidentally. In the film, Ilmars Blumberg does it effortlessly and joyfully -- in the manner peculiar to those pursuing freedom,” says the producer Janis Redlikh.

The film signifies a continuance of the partnership with Ilmars Blumbergs. Originally, fundamentals of the partnership were laid down by the Chairperson of the Board and the principal shareholder of Baltic International Bank Valeri Belokon in 2009. At that time, Bank sponsored a triumphant return of Verdi’s epic AIDA to Latvian National Opera’s repertoire, and Ilmars Blumbergs presented a splendid visual interpretation of the performance. In autumn 2013, the artist celebrated his 70-year jubilee. Baltic International Bank sponsored Blumberg’s solo exhibition titled „I Will Not Die”, and the edition of the eponymously-named book about the artist’s life and art.