On Friday, 8 November, Baltic International Bank celebrated Phase 1 Rafter Festival for its major renovation and reconstruction project – Kalēju Quarter – marking the completion of an important phase of the construction works, i.e. reinforcement of the load bearing structures, and roofing. Kalēju Quarter is the Old Riga quarter between Kalēju Street and Vecpilsētas Square where a five-building complex is being renovated. The first phase of the project – renovation of two historic buildings (the new premises of Baltic International Bank) – has been completed. 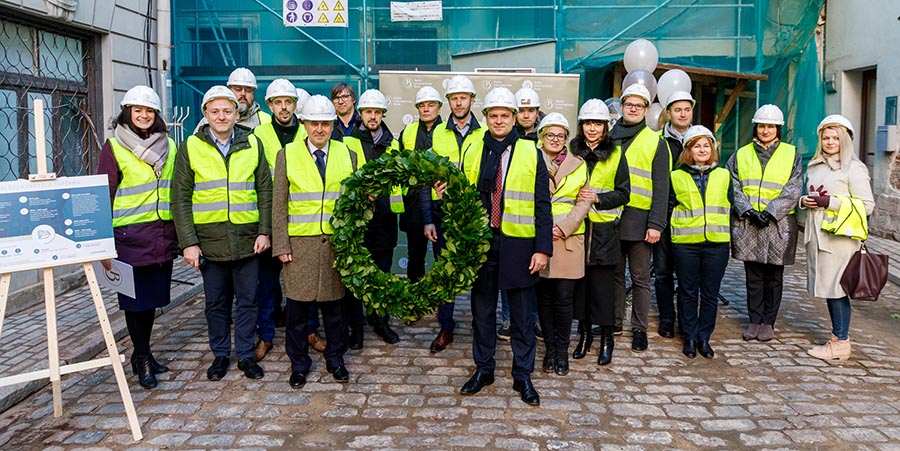 We highly appreciate and thank the builders for their work and are confident that as a result of the reconstruction of this major quarter Riga will obtain another significant sightseeing and recreation place, local business people – business premises in Old Riga, and the Bank – office space.
Viktors Bolbats

"I would like to emphasise that the project is implemented in the highest quality in close cooperation with the supervisory authorities; since succession is one of the core values of Baltic International Bank, in the project implementation we paid the utmost attention to the preservation of the cultural and historical heritage which was also confirmed by the external experts who gave positive opinions. We want to be competitive in the labour market, so today we think of how to attract top professionals to the Bank. We see that for the new generation the working environment and conditions are one of the factors according to which they choose their employer, so the Kalēju Quarter will be a working environment tailored to the modern employee," says Viktors Bolbats.

The guests of the event had the opportunity to take a guided tour of the Kalēju Quarter renovated buildings under the guidance of the architects Ivars Šļivka and Juris Šūpols. Presenting to the guests the work done in the field of construction and technical works, as well as in the preservation of the historical evidence of the building, the architect Ivars Šļivka emphasised that the renovation of the Kalēju Quarter is characterised by sustainable solutions implemented within the framework of the principles of restoration of cultural and historical buildings and in compliance with all legal enactments and regulations governing the execution of construction works in the historical centre of Riga.

“The Rafter Festival is an important milestone showing that the works are done as planned; it is the time when we can appreciate what we have accomplished. At present, two historic buildings are being restored in the Kalēju Quarter after the putting into operation of which works on the other three building will be continued. In these two buildings, we have carried out large-scale technical and construction works as well as cultural and historical restoration. In order to preserve the historical evidence of the buildings, two culturally valuable and ornate objects have also been restored. The state art monument of 1593 – Epitaph – was renovated and is planned to be included among Riga's most famous sights. A beautiful, historic furnace has also regained its appearance,” says Irīna Armanova, Project Manager for Real Estate Development, noting that the entire building complex is being designed with special energy efficient solutions (which is a big challenge in Old Riga) as well as new engineering networks. After the reconstruction, the total floor space will increase as the existing floors have been re-planned and two new floors – the sixth and the seventh – have been added.

In March 2020, 90 of the 220 employees of Baltic International Bank will be able to move to the new premises in the Kalēju Quarter renovated buildings which are equipped in line with modern work environment principles and align with the Bank's ESG (Environmental. Social. Governance) approach which, in addition to preserving the environment and good governance, also implies the implementation of the principles of corporate social responsibility at the highest level and concern for the employees enabling them to work in a progressive future office.

Construction began in 2018, and throughout the ambitious project archaeologists were working together with the builders. The total investment will be around EUR 12 million. The project is expected to be completed by 2022. The aim of the project is to create a publicly accessible Old Riga quarter where everyone will be able to see and touch the historical evidence of the city's formation for nine centuries. The cultural and historical heritage will be combined with an attractive working environment for the employees of Baltic International Bank. The quarter is located in the territory of the urban monument of national importance “Historic Centre of the City of Riga”, a UNESCO World Heritage Site “Historic Centre of Riga” and an archaeological monument of national importance “Archaeological Complex of the Old Riga”. The remains of the Riga city wall (approx. the year 1200) have been preserved along the quarter nearby Kalēju Street. After the reconstruction, the revitalised quarter will consist of two main functional zones. Commercial galleries or passageways will occupy the lower three floors of the buildings, the Money Museum will be on the first floor, and Baltic International Bank's office space will be on the upper floors. The quarter will house a high-end restaurant, while the courtyard-built atrium will accommodate small exhibitions and concerts. The works are performed by the architectural firm Ivara Šļivkas birojs LLC and the contractor Ramej Construction LLC. 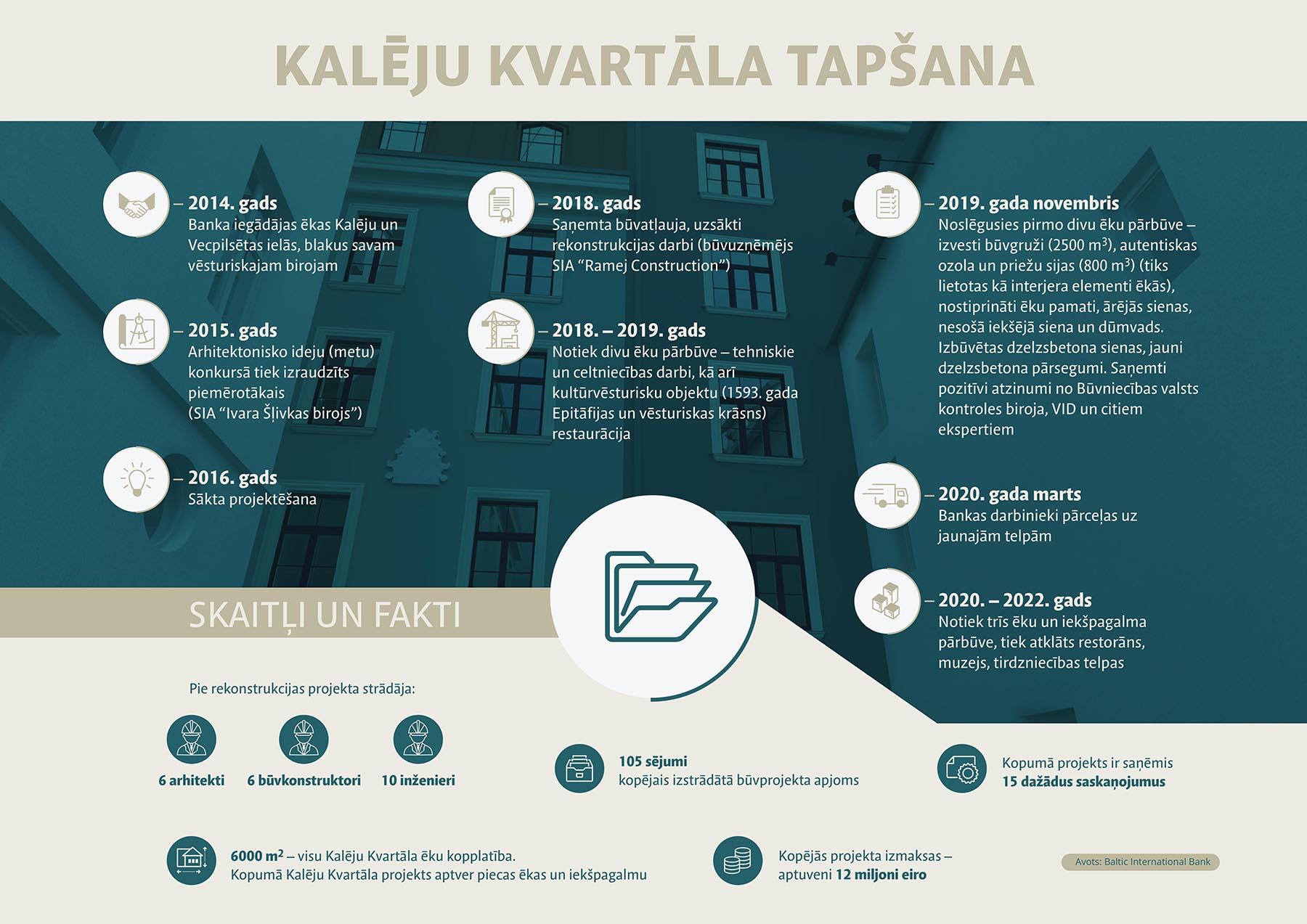